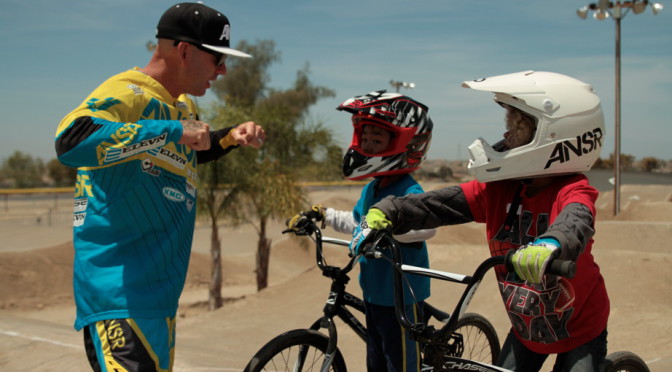 This past week we held our season opener of “BMX Pro for a Week”, our summer camp experience offered through a partnership with both the Toby Wells & Mission Valley YMCA facilities. Our goal has been to reach out to kids not currently in the BMX circle to get them excited about the sport of BMX. While, some of our campers have been to BMX tracks before – most have not and enjoy learning what BMX Racing is all about.

By the week’s end, these kids are able to make full laps at both stops: Kearny Moto Park and Chula Vista BMX (at the Olympic Training Center). Several of our campers were actually participants in our Ride to End Obesity Program. In fact, Victoria was one of these kids We taught her how to ride a bike just 8 weeks ago and she actually rode the track. It’s exciting to be able to give back and make a difference in the lives of kids that otherwise wouldn’t be able to afford to participate.

Victoria left campFriday with a new bike, jersey and helmet – thanks to our sponsors! This is what BMX is all about. These kids are excited to continue with the sport and try their hand at racing. A big shout out to ChaseBMX, StayStrong, Walmart, BaronaCasino, VeeTireco, GoliathFinancial, ANSR, Shimano, WearsRobJames, ODIGrips, KICKER, StealthHubs, KMCChain, & GForm for making this possible.

Over the weekend the team traveled to Salt Lake City, Utah for the USA BMX’s Great Salt Lake Nationals. It’s always one of the team’s favorite spots to stop with great weather and a challenging track. Bryce Betts is really starting to come into form going into the summer months, making 3 out of 4 mains with his best place finish a1st in Open on Sunday. Keep an eye on Bryce’s social media- he has been writing some great road trip reports for bmxnews.com – alongside doing a number of clinics. He’s been a great asset to the team, as he’s creative and always on the go.

Cristian Becerine had an up and down weekend – he crashed out Saturday in the main but came back strong with a 2nd on Sunday. Anthony Dean was really looking to put in a strong performance this weekend but was held back a bit by a crash on Saturday. Battling through a bit of soreness – he tried to race Sunday but was in too much pain so he called it a day. He’s already en route to Germany, as he prepares for the third round of the UCI World Cup Series.

Team manager, Dale Holmes, decided to race Saturday only and managed to get the win. All in all a decent weekend for the team. Next up, Rockford in a couple of weeks. 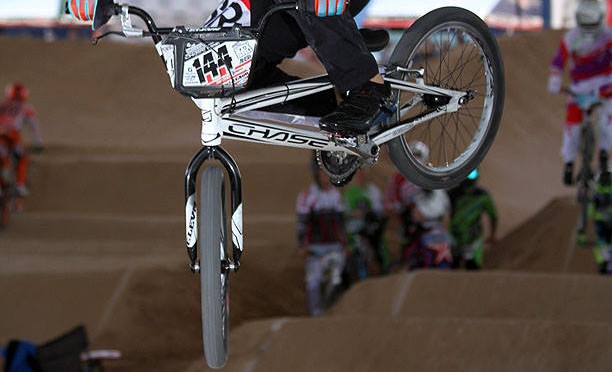 Over the weekend, the team headed to Albuquerque, New Mexico, for the USA BMX Spring Nationals. It was the first time we’ve had a full team line up in awhile, as our guys have been busy in different parts of the world fulfilling commitments and racing.

Cristian Becerine has been recovering from a bit of a knee injury sustained in Atlanta a few weeks ago but decided to give it a go over the weekend. Saturday, Cristian was winning the final and unfortunately unclipped and it cost him a podium but Sunday he came back strong taking a win.

Bryce Betts raced all three days and made 5 main events. He came away with two podiums and a good, consistent showing for the weekend.

Anthony Dean was back in the states from world travels and even though the results don’t show it, he was riding well all weekend but crashed on Saturday while in a qualifying position in the semi-final. Sunday, same bit of bad luck struck again and a crash kept Anthony out of the main event and the fatigue from travel was really starting to set in. It was time to head back to San Diego to regroup.

Team Manager, Dale Holmes raced and took the win both days in his class.

All in all, a good weekend. Cristian heads out to Nashville this weekend and the full team line up will be in Salt Lake City the weekend after – keeping it busy, just the way we like it. 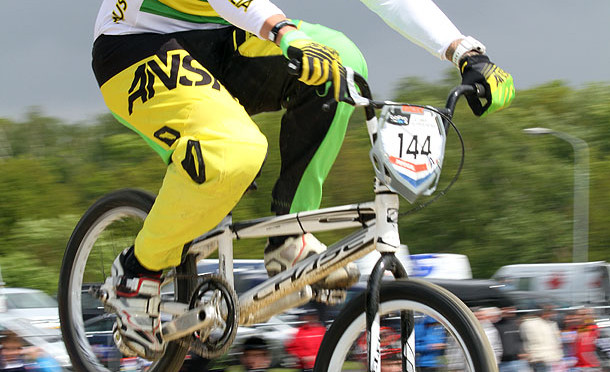 This past weekend, Anthony Dean was in Papendal, Holland for the second round of the UCI World Cup. Despite terrible weather all week, Anthony stayed focused and didn’t let the weather talk him out of putting on a good performance. Just like Manchester, Anthony was winning laps all day long and was really hungry for another podium and a chance to challenge for a win. A few mistakes in the final cost him the podium but he pulled through with a solid 4th place behind Sam Willoughby and World Champion, Liam Phillips. Anthony now sits comfortably in 2nd place in the UCI World Cup overall points going into Germany next month.

Next up for Anthony, it’s heading back to the US to get back on the USA BMX tour for the next several weeks. 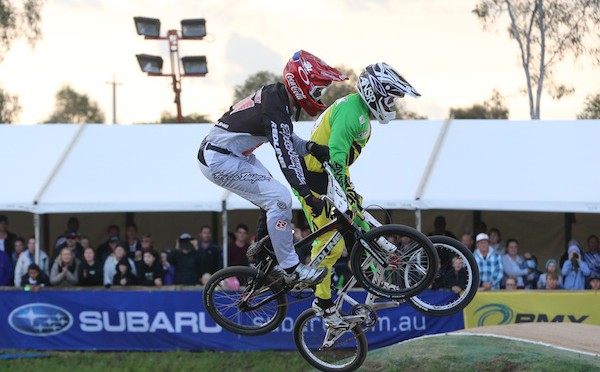 Close race this past weekend for Anthony Dean at the Australian National Championships battling all the way to the finish line with Sam Willoughby. Anthony just missed the Australian National title by an inch on the line. To battle and be so close with Sam was a great confidence booster for Anthony. He is already on the plane heading back to Europe for the 2nd Round of the UCI World Cup in Holland next weekend where he hopes to capitalize on his 2nd place from a few weeks ago at Round 1 in Manchester. We’re pumped with how well Anthony is riding right now and wish him well in Holland. 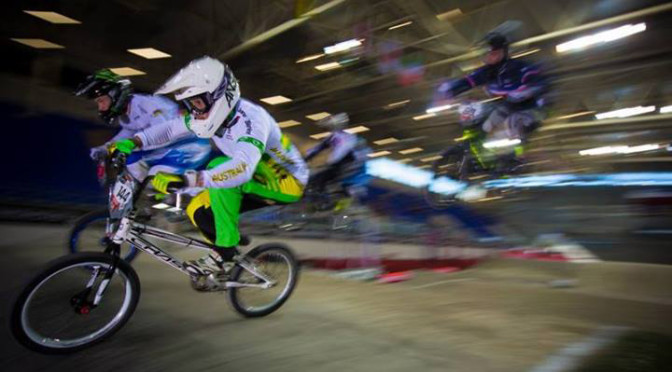 This past weekend was the 1st stop on the UCI World Cup Series in Manchester, England. Our Anthony Dean hooked up with the Australian National Team for the first training camp/trip to Europe of the year. After a successful camp the week leading into the race, Anthony started to feel more comfortable on the big hill.

Once race time arrived, his confidence was really up and he was banging out wins straight away. After a solid win in the semi-final, Anthony knew that the podium was in his reach. Although he didn’t have the best gate he rode a smart, solid lap and secured his spot on the box with his first ever 2nd place on the UCI World Cup podium. We know there is much more to come.

Anthony continues his World tour – now headed for Australia to race the National Championships scheduled in the next couple of weeks. He will then be back on the road again for the second stop of the UCI World Cup Series in Holland. Special thanks to BMX Australia and to all of our team sponsors for supporting our program. 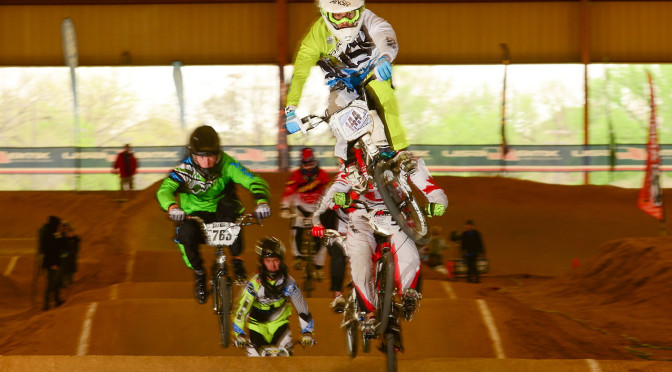 This past weekend the Team traveled to Desoto, Texas for the next stop on the USABMX National Series. Despite some rain over the weekend, the team walked away with some great results. END_OF_DOCUMENT_TOKEN_TO_BE_REPLACED 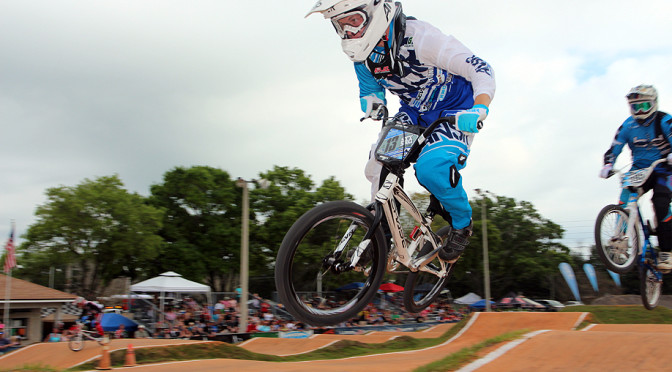 With the second stop of the USABMX Pro National Series in Oldsmar, Florida this past weekend, it marked our first Chase/Stay Strong full-team race outing of the Season. Needless to say, everyone was excited. END_OF_DOCUMENT_TOKEN_TO_BE_REPLACED 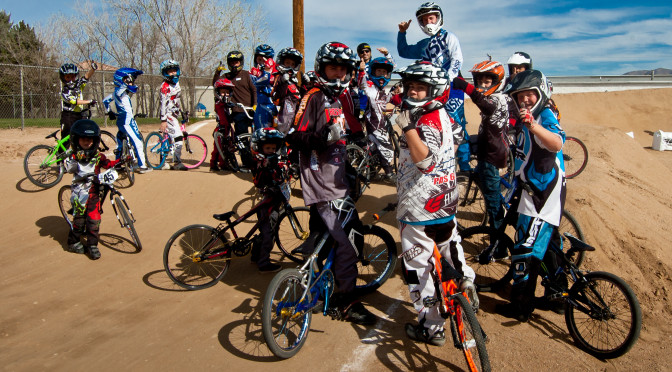 The Chase / Stay Strong Clinic Tour is off to a great start with 3 stops in So-Cal. The team just finished up this past weekend at Hesperia BMX. Again, they were lucky with incredible weather – 80′ in the high desert with a cool breeze. It was great for the team to see so many familiar faces at the clinic and impressive to see the improvements in so many of them. The team looks forward to another visit to Hesperia BMX. Many thanks to Dan and the other local supporters for making it a fun day. The Ride to End Obesity program kicks off in two weeks – the team will look forward to keeping you updated. Any tracks (nationwide) interested in working with the team to host a clinic, please contact Daleholmes99@gmail.com. Cheers! 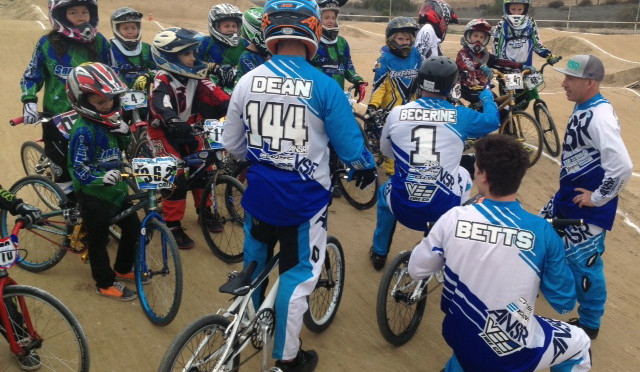 Yet another great Clinic weekend for the Chase / Stay Strong Team with Anthony Dean, Cristian Becerine, Bryce Betts and Team Manager, Dale Holmes. We were really impressed with the kids’ abilities and we felt it was one of the best track’s we’ve ridden on the West Coast – great vibe for sure. Thanks again to our sponsors for making it happen – there were no shortage of smiles on the kids’ faces. Next up, this coming Saturday, February 22nd we’ll be at Hesperia BMX from 1-3p.m. — Hope to see you there!
#ChaseBMX #StayStrong #Walmart #BaronaCasino #VeeTireco #GoliathFinancial #ANSR #Shimano #ODIGrips #KICKER #StealthHubs #kmcchain