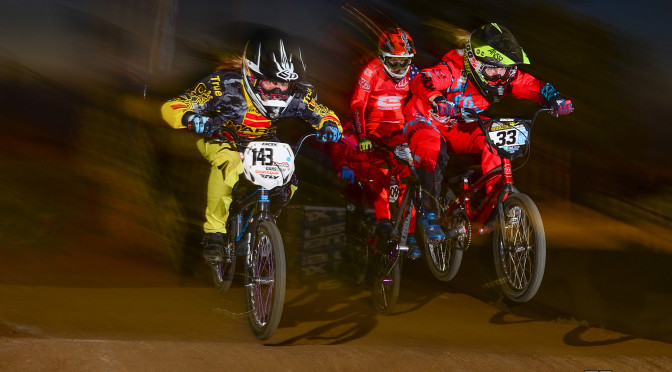 The USA BMX Fall Nationals made its way back to Southern California this past weekend at the legendary Mike Redman’s Lake Perris Track, which also held this event in the late 90s & 2009. Both Dani George & Anthony Dean were racing, in fact it was Anthony’s first race back since the Rio Olympics so he was really looking forward to getting back out there in the AA mix.

Lake Perris is Dani’s home track and she was looking to add to her year-end points tally but just was in the wrong place at the wrong time in both Friday’s and Saturday’s main events finishing mid-pack. Still, Dani sits top 3 going into next month’s USA BMX Grands so she’s looking to put in some work now and finish up the year with a top 3 place in the National series.

Anthony was back to his winning ways in Perris winning lap after lap all weekend long. On Friday, a little late gate in the main cost him a podium but he came back strong Saturday with a 2nd place behind the on form 2X Olympic Champion, Maris Strombergs.

Another good ride in Tulsa next month could help Anthony climb into the top 5 and a good way to finish off the 2016 season. 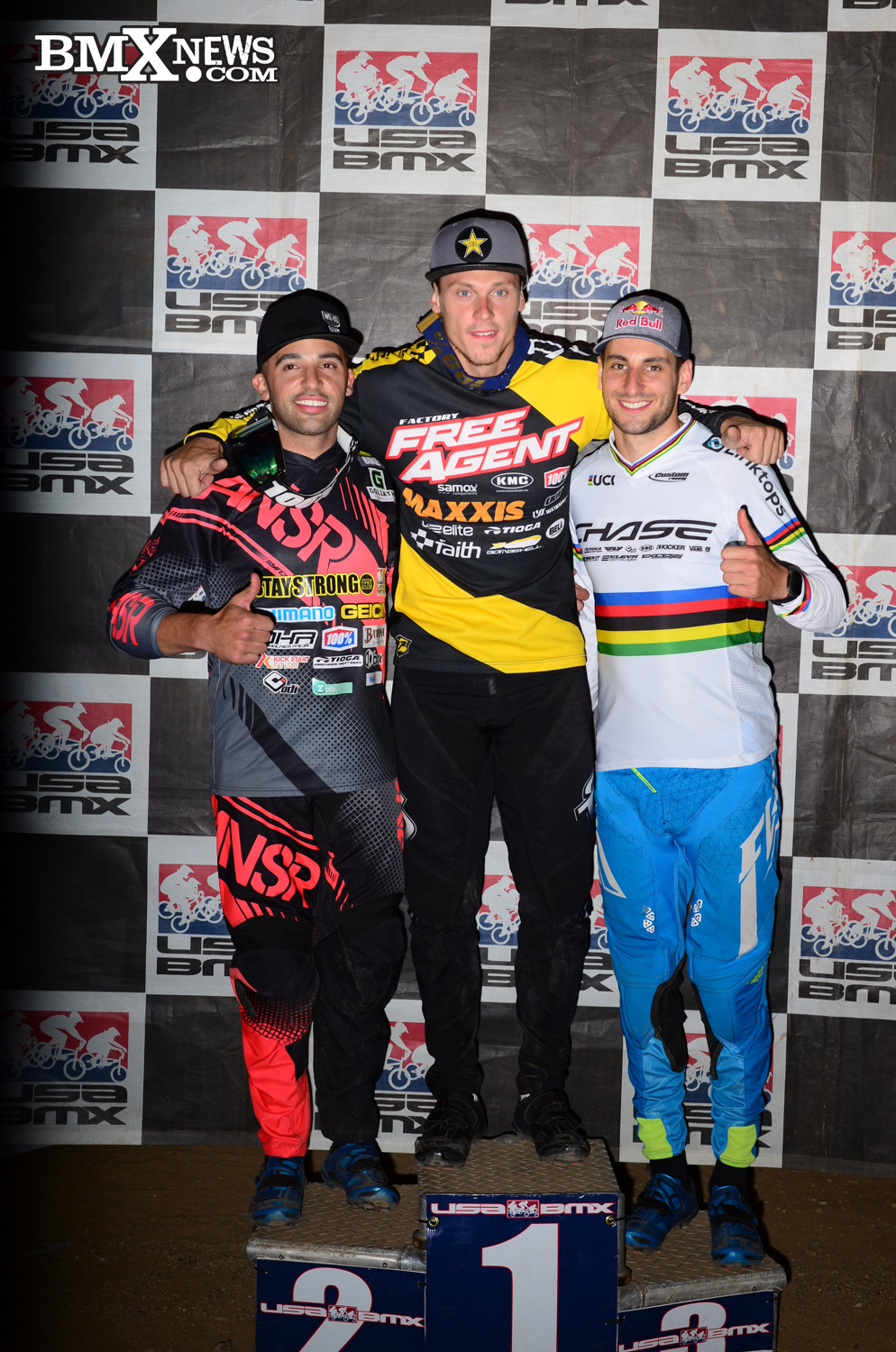 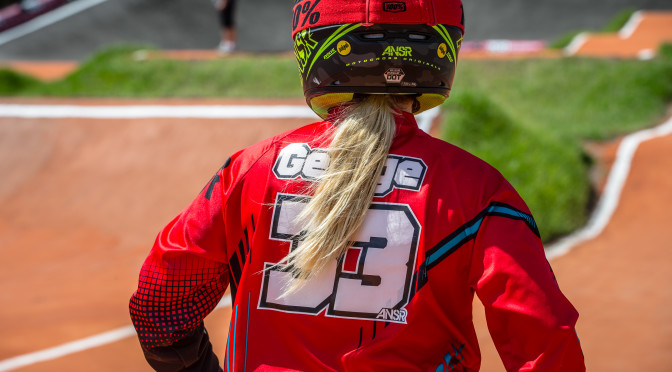 It’s a wrap on the 2016 UCI SX World Cup Series with the final in Sarasota, Florida. Dani George made her way through Saturday’s Time Trial, onto Sunday’s racing and then transferring through the moto’s & semi into the final, finishing 6th place and 8th overall in the World Cup standings. Despite an early season of injuries, Dani still put in a solid World Cup season and now changes focus for the last two rounds of the USA BMX National series in Lake Perris, CA and the Grand Nationals in Tulsa, Oklahoma over thanksgiving weekend. 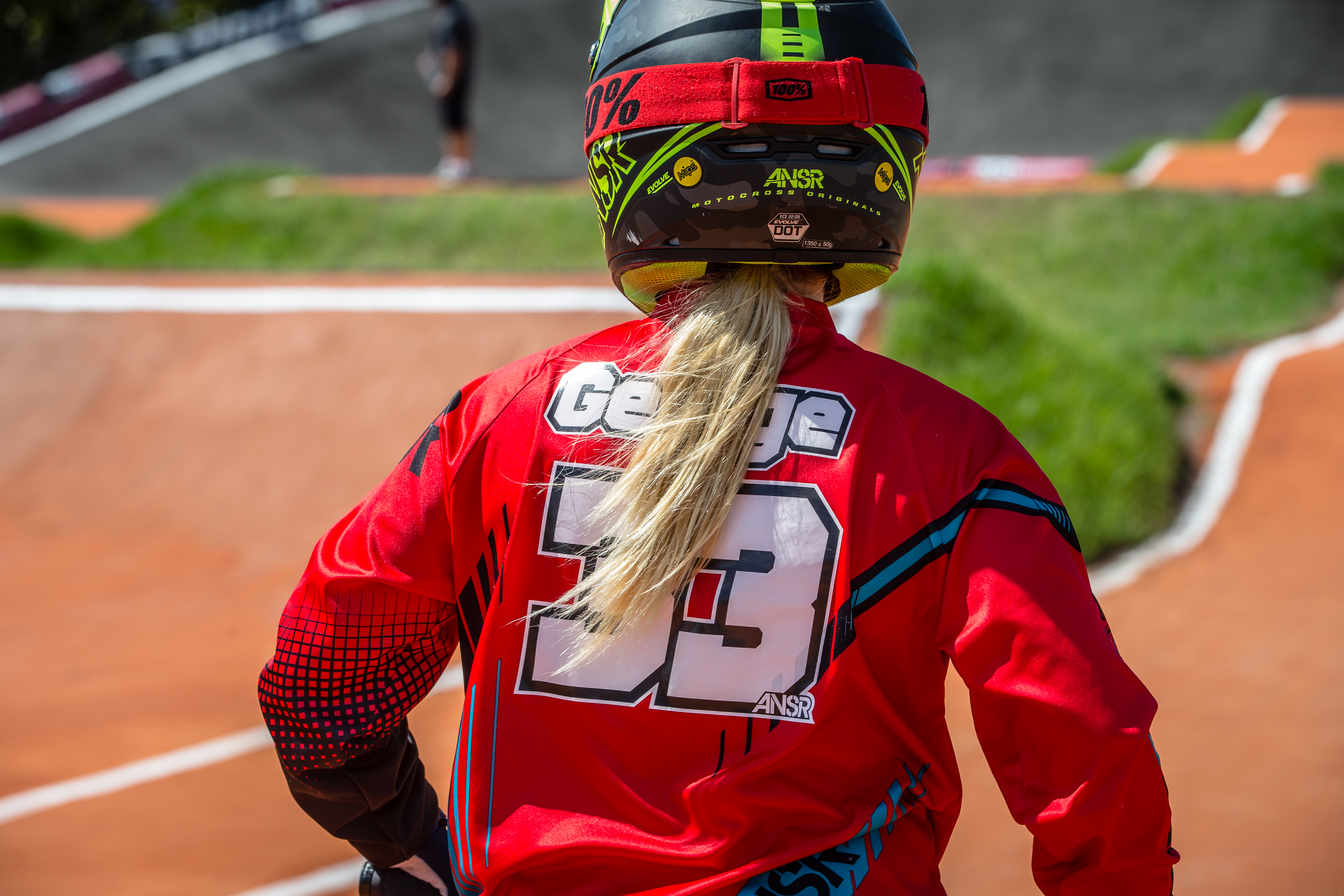 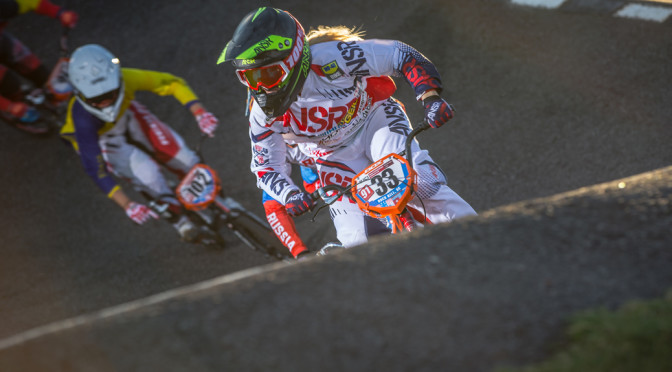 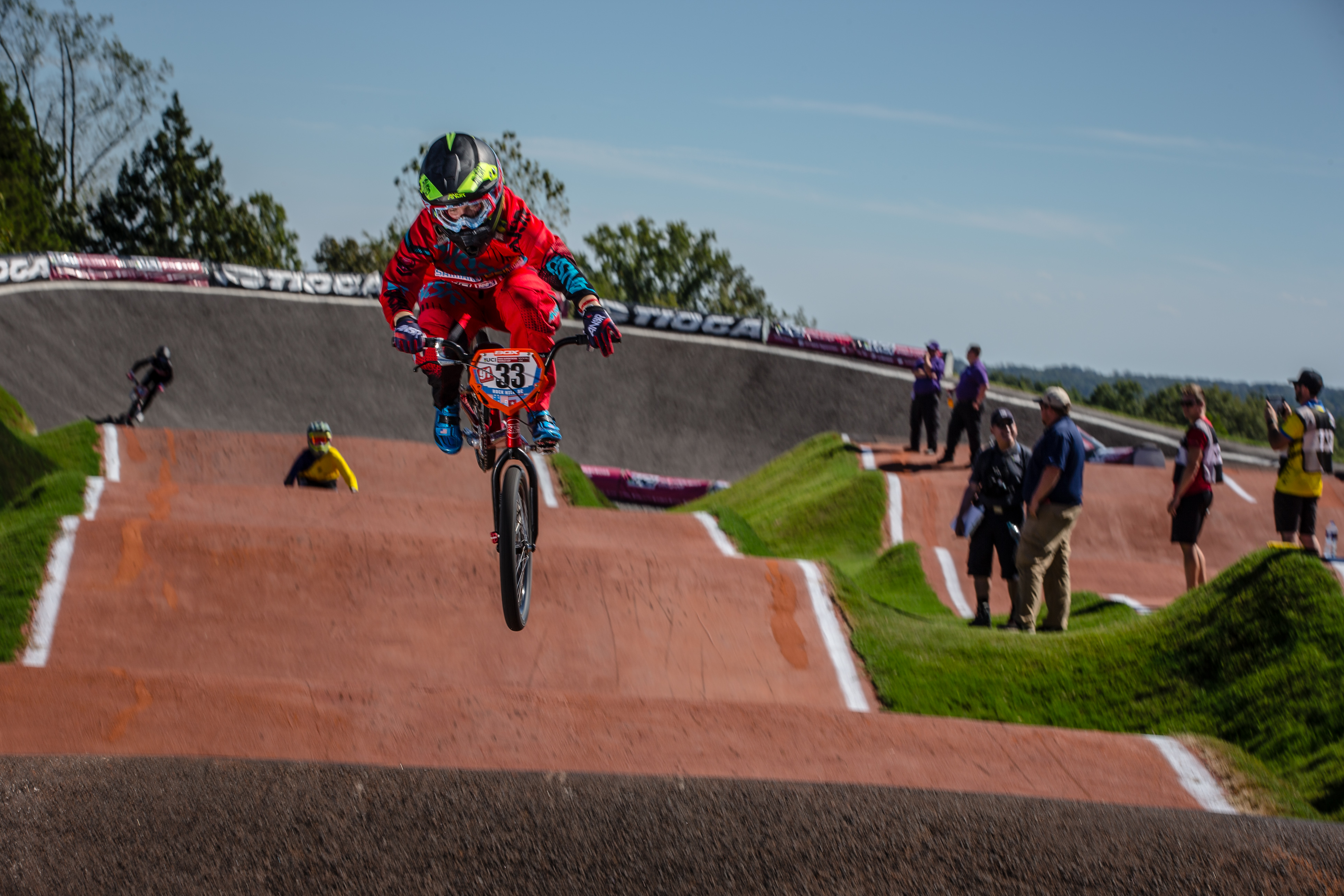 Round 4 of the UCI World Cup this past weekend was held in Rock Hill, South Carolina on the Novant Heath SX Track, which will also host the 2017 UCI World Championships for the first time in the US since 2001. Flying the flag for the team, Dani George was ready to get back on the SX circuit and put in a good showing especially on US soil. Dani rode consistent all day, putting herself in the main event. Coming out of the gate from lane 8 going into the first turn, Dani sat in 3rd but drifted a little wide on the exit losing some momentum pushing her back to 5th crossing the finish line. Still, some good points made for the overall and now Dani heads to Sarasota, Florida for the final round of the 2016 SX season and to continue to build on this weekend’s result. 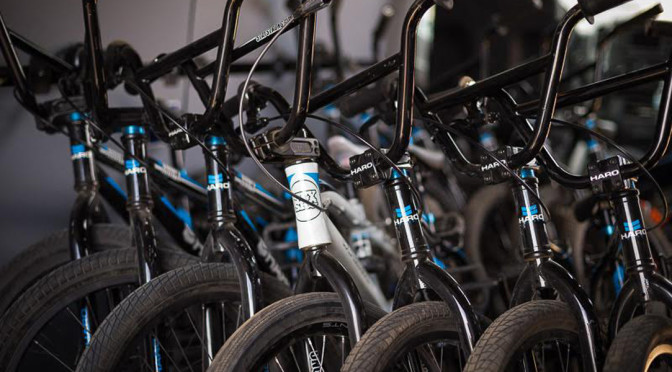 We had an incredible summer camp season with our BMX Pro for a Week camp offering through a partnership with the YMCA of San Diego County. We reached hundreds of local kids with a positive message of staying active, healthy eating, avoiding destructive decisions and the full 101 of BMX Racing.

Special thanks to Troy White Photography for making the trip to the track to capture some of these moments.

Stay-tuned for Fall clinic dates, Holiday camps and our full calendar for 2017! 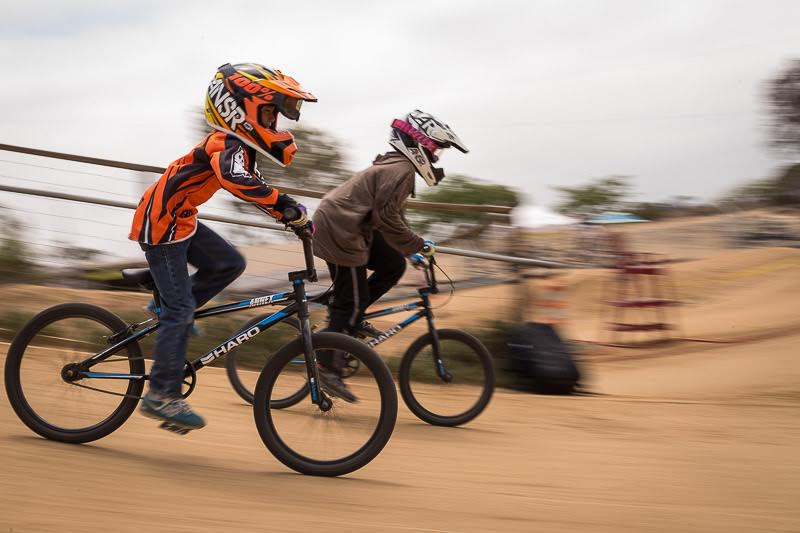 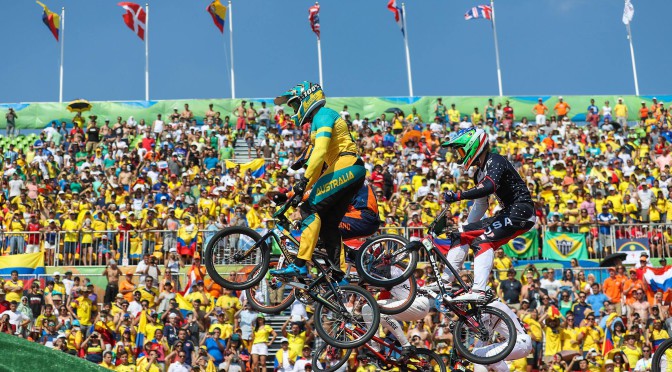 With this past weekend’s much anticipated Olympic Games in Rio – Anthony Dean went in strong with good preparation, leading in finishing up with a month’s training camp in San Diego with the Australian National Team.

Anthony was on it, straight-off-the-bat feeling good in practice and using the Time Trial to iron out a few kinks, easing into Thursday’s quarter finals, and finishing with two wins and a third, thus qualifying first for lane pick for Friday’s semi final.

The triple semi format was set, and Anthony went into automatic mode wining all 3 semi’s. By now it was evident he had a huge chance not only to medal but also to win. Australian teammate, Sam Willoughby, was doing exactly the same on the other half of the draw – winning his semi finals and setting everything up for what it looked like an Australian showdown for Gold. Still, this is BMX and anything can happen as we know.

Even though Connor Fields was not a stand out during qualifying he was gaining confidence all day long. Sam started in lane one, Anthony in two and USA’s Nic Long in three. The gate slammed down and it was evident Anthony was slightly late – and enough for Long to shut him down and put Anthony to the back of the pack and end his Olympic Dream.

Meanwhile, upfront, Nic Long was winning into turn two but made a small mistake enabling Connor to attack and pass Nic on the third straight; Connor went on to win Gold.

Anthony was disappointed as expected and came in 8th knowing he had missed a big chance, but nevertheless, did himself and his country proud on the big stage. To be in the Olympics Final is no small thing and we are very proud of him. 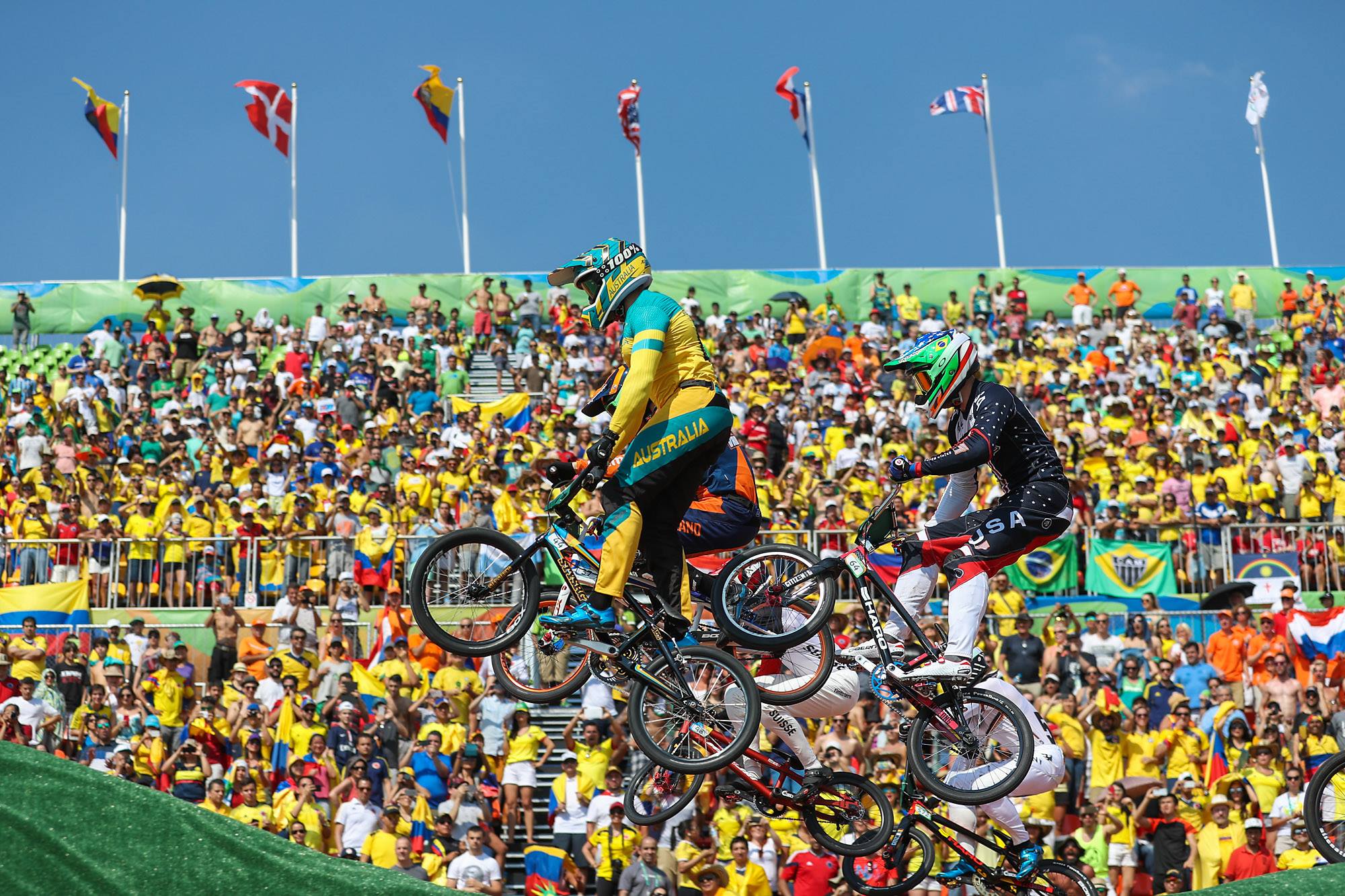 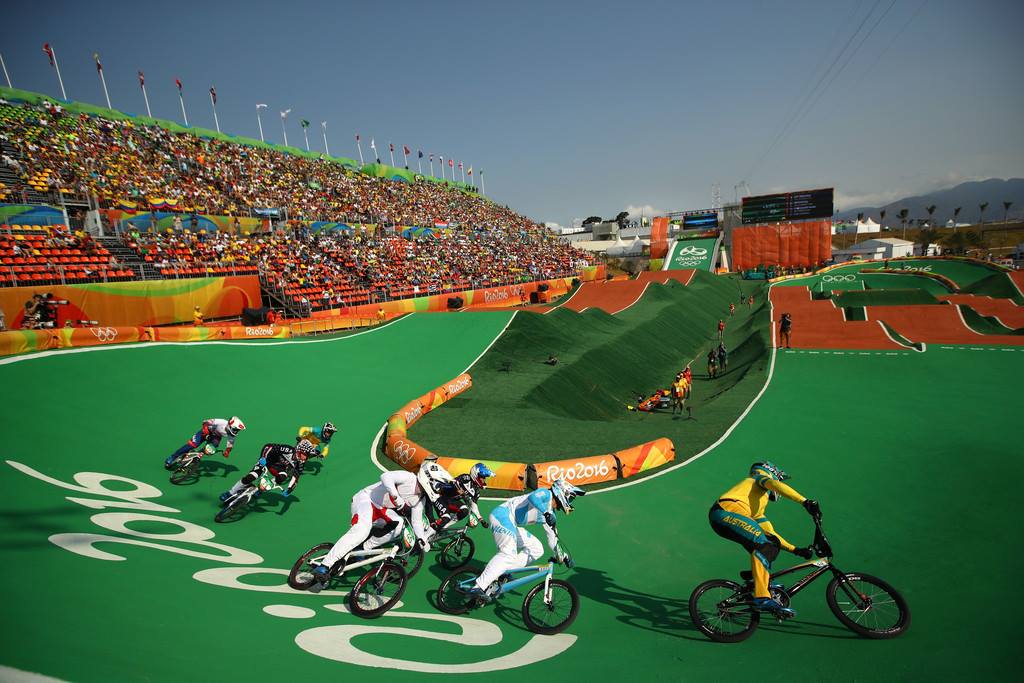 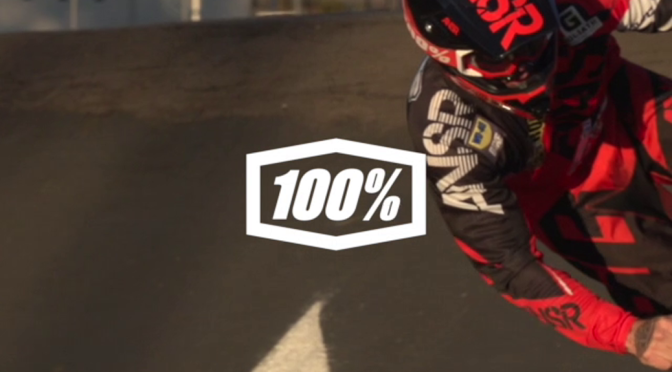 The guys at ride100percent filmed this cool little clip of the Team. 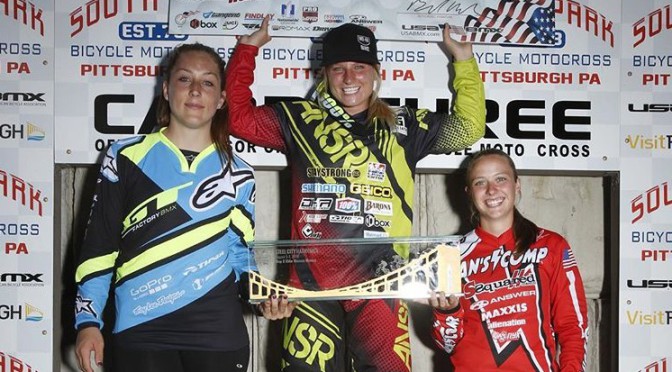 The South Park, PA race has got to be one of the most iconic events on the US calendar since the 80s, whether it be during the NBL days or since the merge into USABMX in recent years. The track is always a favorite with the Elite / AAs even today with only a few tweaks over the years everyone still loves South Park.

Dani George is in fine form at the moment even though she missed out on making the US Olympic Team she has still been a pivotal member of Team USA’s Olympic preparation training team with Brooke Crain in her Rio build up. Dani made the trip out to South Park and cleaned up winning both days and some good scores going into the year-end points chase. 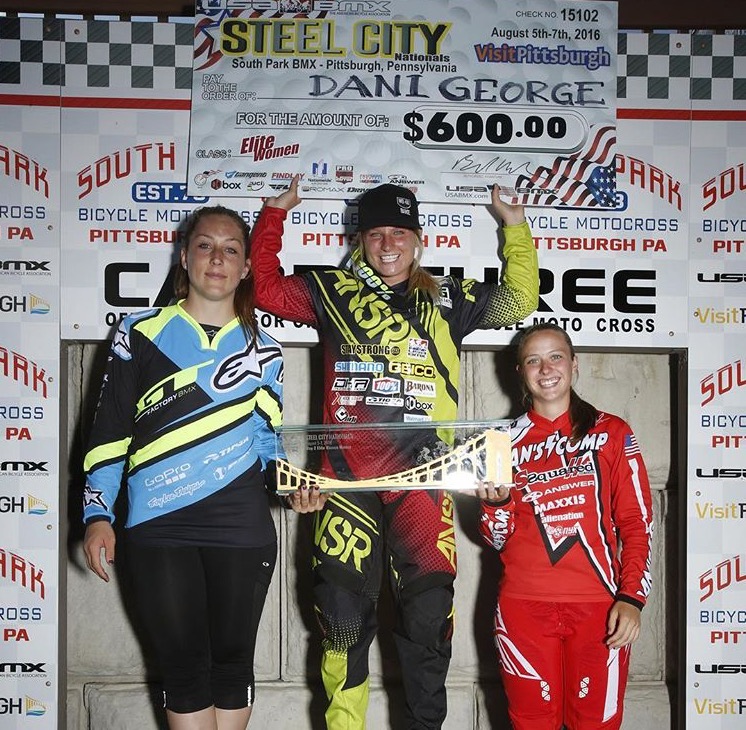 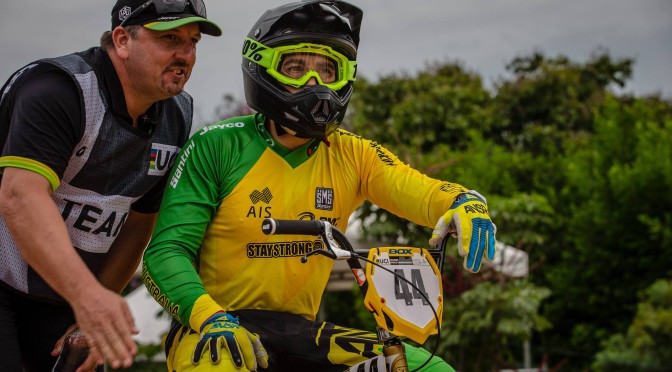 It’s official, Anthony Dean is heading to Rio for the Olympics as part of the Australian National Team. Just over 1 month to go until the big show. Keep an eye on all of our social media outlets to follow Anthony’s journey leading up to and during the games. 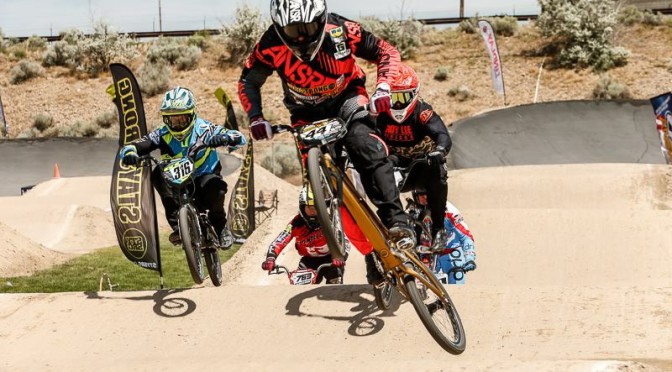 The Great Salt Lake Nationals has been a regular stop on the USA BMX Tour and is always a top-notch event coupled with good weather this time of year. Both Anthony Dean and Dani George were ready to put the World Championships behind and after a few solid weeks of training down in San Diego, they were both ready to get some good results in on the domestic calendar.

Friday, Anthony was feeling strong all day and come main time — not even World Champion, Joris Daudet could stop him taking that much-eluded National win he has come close to many times. Anthony not only took the first place check but also grabbed the Holeshot bonus as well.

Dani George was feeling good placing 2nd on Friday behind National Champion, Alise Post but an unlucky crash out in Saturday’s semi final left her out of the main. Even tough it was disappointing, Dani knows she’s riding well and can carry it through the summer.

In all, a great weekend for the team with 3 podium finishes. 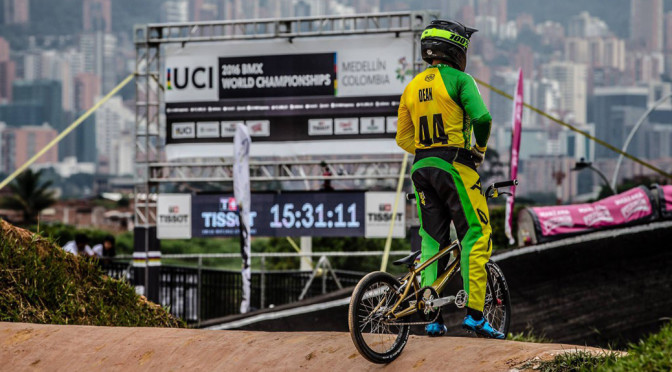 The UCI World Championships in Medellin, Colombia have both come and gone, and it wasn’t the weekend Dani George and Anthony Dean were looking for. Sometimes bad luck strikes and there is nothing you can do about it – that’s bmx racing. Congratulations to Joris Daudet and Mariana Pajon on taking the Rainbow Jerseys in the Elite classes. Both Anthony and Dani head back to California to rest up and get ready for the next stop on the USA BMX Tour in Salt Lake, Utah in a few weeks time.