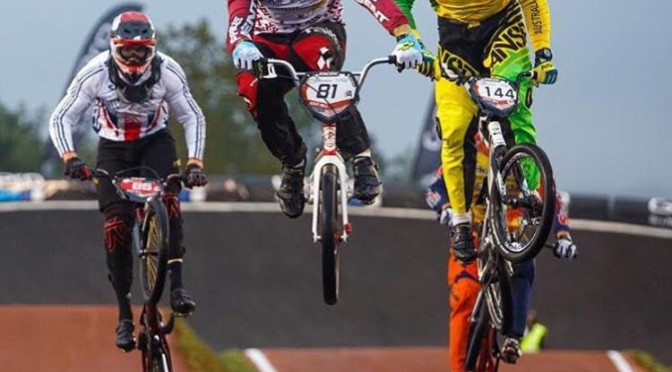 Last weekend marked the final stop on the UCI Supercross Tour in Rock Hill, South Carolina. Both Anthony Dean and Dani George were ranked in the top 10 in points and with a good showing could have moved into the top 5 in both the Elite Men and Woman’s classes. Anthony could have made it into the 3rd overall with a podium finish. The weather was troublesome, as it was raining continuously through practice, Time Trials and into Saturday night’s main show under the lights of Rock Hill at this fantastic new facility that will also hold the 2017 UCI World Championships.

Dani George was starting to feel good again after last month’s injury and once again put herself in the Elite Women’s final and heading into turn one in podium contention. Unfortunately, leader Alise Post, went down resulting in Dani getting caught up and out of the running. Still a good consistent SX season where Dani finishes 7th for the year and continues to build going into 2016.

Anthony Dean was riding all weekend with a knee injury he picked up in training but didn’t let this slow him down one bit putting himself in the final and lining up against all the big names in the sport. Not the greatest gate for Anthony, as he had to fight all the way around but still finished up with a solid 5th for the night, which also gave him enough points to finish 5th for the year in SX rankings.

Both Dani and Anthony along with Bryce will now change their focus to finish off the USA BMX season with races in Chula Vista, Tampa, Florida and the Grand Nationals in Tulsa, Oklahoma over Thanksgiving weekend.