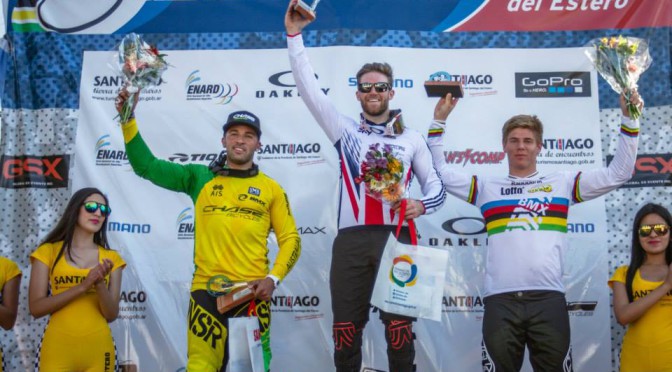 This past weekend was round 4 of the UCI World Cup in Santiago Del Estero, Argentina in South America. Both Dani George and Anthony Dean made the trip down with their respective National Teams, USA and Australia, looking to put in a good showing. Dani was still recovering from a crash a few weeks ago in Colorado but gave it her all during the race. Unfortunately, she didn’t progress beyond the semi final, which put her out of the main event. Despite a less than perfect performance, she still goes into the final round in Rock Hill sitting in the top 10 and with some much-needed rest, there’s little doubt she’ll finish the World Cup 2015 Season off strong.

Since the World Championships, Anthony, has been struggling a bit with mid-season burn out given all of the travel and racing, which is not unusual for this time of year. It goes without saying, Anthony had to dig deep for this one to get back on a plane for a long haul down to Argentina. Still once again, he proved how strong he is not only physically but also mentally – as he remained positive all week. Anthony rode solid all day and put himself in another World Cup final. A good gate and strong first straight, Anthony crossed the finish in 2nd place behind World Cup leader, Liam Phillips, with World Champion, Niek Kimmann in 3rd. Anthony not only hit the podium once again but also racked up more points towards Olympic qualification in 2016.

Next up, both Dani and Anthony head back to San Diego to rest up and get ready for the final World Cup of the year in Rock Hill, South Carolina before finishing up the final part of the USA BMX National series for 2016 season.